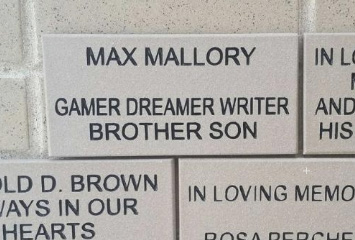 I’ve been involved with Cancer Wellness Center since 2015. I can confidently say this organization has changed my life for the better in many ways. I was introduced to the center by my brother. He was diagnosed with stage 3C testicular cancer in October 2015 due to an undescended testicle that was missed by doctors at birth. The diagnosis was a shock to my entire family, and it turned our world upside down. My mother had dealt with multiple bouts of cancer in the past, but none were nearly as serious as my brother’s case. Plus, this was so unexpected that it made it difficult to accept.

My brother fought his battle with cancer with extreme dedication. He had to start chemotherapy immediately, and he hit the ground running. He kept detailed notes of all the treatments and what was going on with his body. He reached out to other survivors and conducted research on what he was going to go through as part of this rare diagnosis. Max couldn’t find many resources for young adults with cancer. He was only 22 years old when he was diagnosed.

Max was living and working in Wisconsin in 2015 shortly after graduating from the University of Wisconsin-Whitewater. After diagnosis, he took a hiatus from his job at an independent video game company and moved in with my dad in Evanston. While my dad was working full time and unable to be with Max during the day, I took the responsibility of being there for Max as much as I could. I would travel to my dad’s during the day and hang out with Max. I would take him to treatments when necessary. It was a challenging, yet extremely valuable experience that I wouldn’t trade for anything.

I could see my brother fighting this battle with great strength, and I tried to be positive and support him. Sometimes it was going out to eat when Max wanted, and sometimes it was simple things like just watching Max play video games or sitting and talking. It was a time where my brother and I became closer than ever before, and I’ll cherish that for the rest of my life.

Max was going through his treatments and doing exactly what doctors told him to do. But for him, it felt like there were few people that could relate to his situation. He was fresh out of college, and was hired in his field before graduating. He was a success. Then all of a sudden, poof, everything changed. This is where Cancer Wellness Center played such a vital role for my brother. Max reached out to Evan Byer, a licensed clinical psychologist at the center who was starting up a young adults support group. The group is known as The Lisa Klitzky Young Adult Program, and it was essential in my brother’s journey.

Max attended the group nearly every time they met from fall 2015 through summer 2016. He confided in me that it was one of the most important resources he had, as he finally had found a system of support for young adults that was mostly missing on his journey. Max went through two separate surgeries in Indiana at IU Hospital, and each time the group was there for him when he returned. He was fighting an intense battle, and whenever it seemed as if he was about to catch a break, the cancer returned aggressively.

One of my fondest memories of Max is his display of just how important this group was. He was about to begin a stem cell chemotherapy treatment in Indiana in May 2016. The young adults group fell on the night before his treatment started. Rather than go to Indiana a day early and settle in, my brother decided to go to his support group, and then sleep at my mom’s house. They would depart for Indiana at 5 a.m. the next morning to attend the treatment. That night showed me truly how much the group meant to Max, and how much it was helping him. It was the last session of the group he would attend.

Max passed away in Indiana unexpectedly on May 20, 2016, just under a month away from his 23rd birthday. It was a shock to my entire family. It left us in a state of intense grief none of us had experienced before. During this impossible time we turned to the Cancer Wellness Center again for help.

After grieving for many months, I decided I wanted to change career paths. Max had always mentioned that if he was cured of cancer, he would put his career in the video game industry on hold to work for a nonprofit that helped young adults with cancer. I had been interested in nonprofit service before, and decided that volunteering was a good way to start a new journey in my life. I reached out to Cancer Wellness Center and became a front desk volunteer in spring of 2017.

Whenever I’m lucky enough to come to center and sit at the front desk, I think of my brother. I think of the times he walked the halls at the center to go to a group that was so important to him and so vital in his journey with cancer. It was an honor to be a caregiver to Max. Every time I walk out of the center, I turn to my right and see a brick on the wall with my brother’s name. “Max Mallory: Gamer, Dreamer, Writer, Brother, Son.”

It is a powerful reminder of the eternal bond I have with my brother, and I’m so thankful Cancer Wellness Center is a part of that connection.

Our Run/Walk was a great success!

Raising funds for the Cancer Wellness Center!
Scroll to top